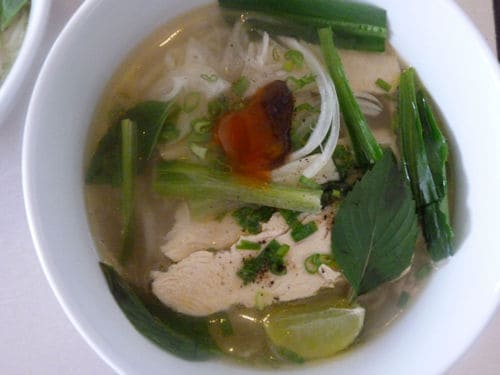 I have a very unhealthy obsession with a very healthy soup. I am talking about Vietnamese pho – otherwise know as chicken noodle soup.

This dish consists of rice noodles in a delicious chicken broth flavoured by a combination of spices such as cinnamon, star anise, cloves and cardamom. I don’t think I have the words to explain to you in this post about how good this tastes. You need a whole chicken, including the bones for this soup, as it is simmering the bones that gives it its deeply concentrated flavour.

I was lucky enough to attend a Vietnamese cooking class where I learned to make pho and other dishes. As we chopped, grilled, sautéed and boiled the afternoon away, our Vietnamese chef shared her secrets for the perfect pho recipe making us repeat them again and again so that we could recreate this soup at home. Here are some of her tips.

The whole chicken needs to be blanched in boiling water for 7 minutes after which that water is discarded. The broth is then started with the chicken and some fresh boiling water. This is necessary to produce the clear broth that makes this dish.

Chicken breast meat should be removed from the broth after about 20 minutes of boiling. Otherwise it will become too dry.

The ginger, onions and shallots have to be charred first before putting them in the broth to bring out their flavour.

The spices need to be toasted first before being put in the broth to bring out their flavour.

It sounds complicated – but it is not. Yes, it has quite a few ingredients but every single one of them has its place in making this flavour-full healthy soup. You can also buy the packets of pho spices already bagged up in Asian stores. And trust me, this chicken noodle soup is good, good, good.

And if you love soup as much as I do, you will want to try my Instant Pot Chicken Noodle Soup. So tasty and so quick to make!

So here is my Vietnamese pho recipe. What do you think?

Don't forget to tag #recipesfromapantry on Instagram or Twitter if you try Vietnamese Pho! It is really, really awesome for me when you make one of my recipes and I'd love to see it. You can also share it on my Facebook page. Please pin this recipe to Pinterest too! Thank you for reading Recipes from a Pantry. 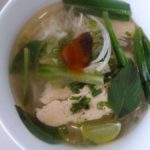