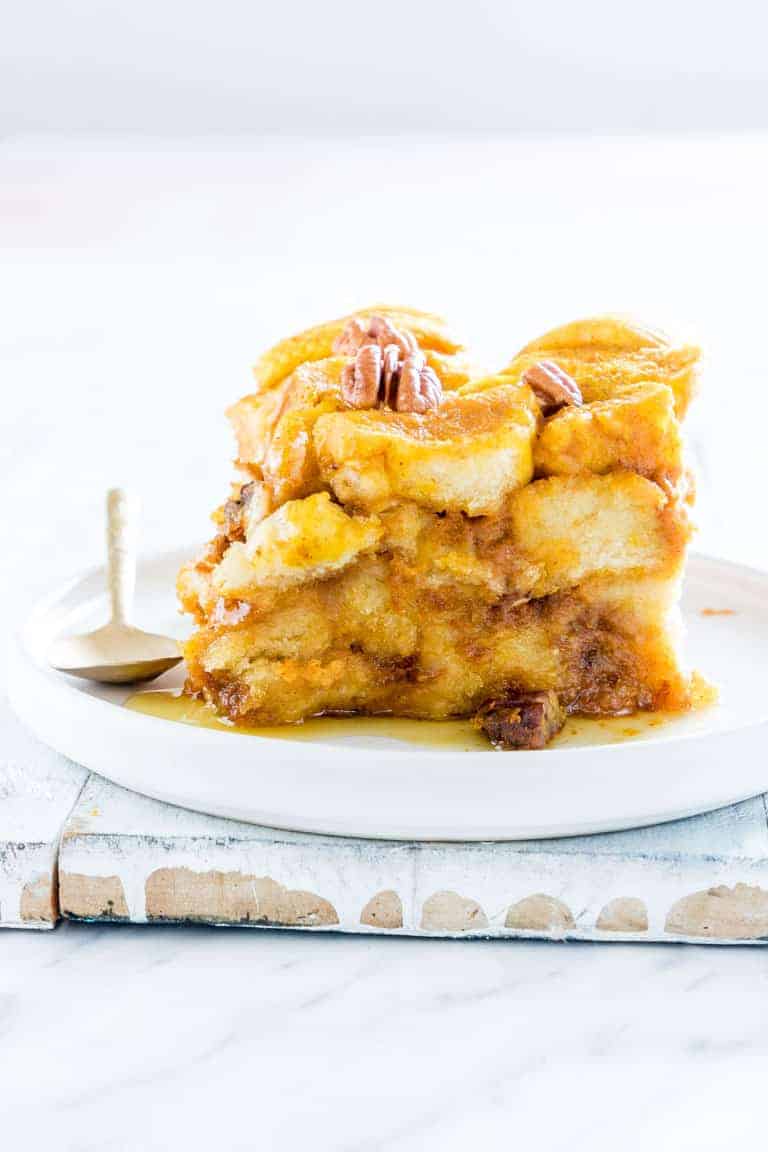 Pumpkin season is slowly creeping upon us and I fully intend to throw myself into the pumpkin in this, pumpkin in that and pumpkin in EVERY SINGLE THING madness that comes with it.  Starting with this Slow Cooker Bread Pudding with lots and lots and lots of pumpkin in it. Are you with me?

To be honest pumpkin season never stops in my kitchen and I could and do make curried pumpkin soup a couple of times a month along with a gazillion other pumpkin recipes but with Fall comes the actual excuse to make a lot of new recipes. Plus, anything to use up leftover pumpkin puree is a win.

Plus, we all need easier slow cooker desserts in our lives and this one is seriously easy to make. Which puts it firmly in the great weeknight dessert/ideal make-ahead recipe / and one of the go-to crockpot desserts territory.

I say yes to a bowl full of sweet pumpkiny bread with lovey walnuts with syrup drizzled all over it. 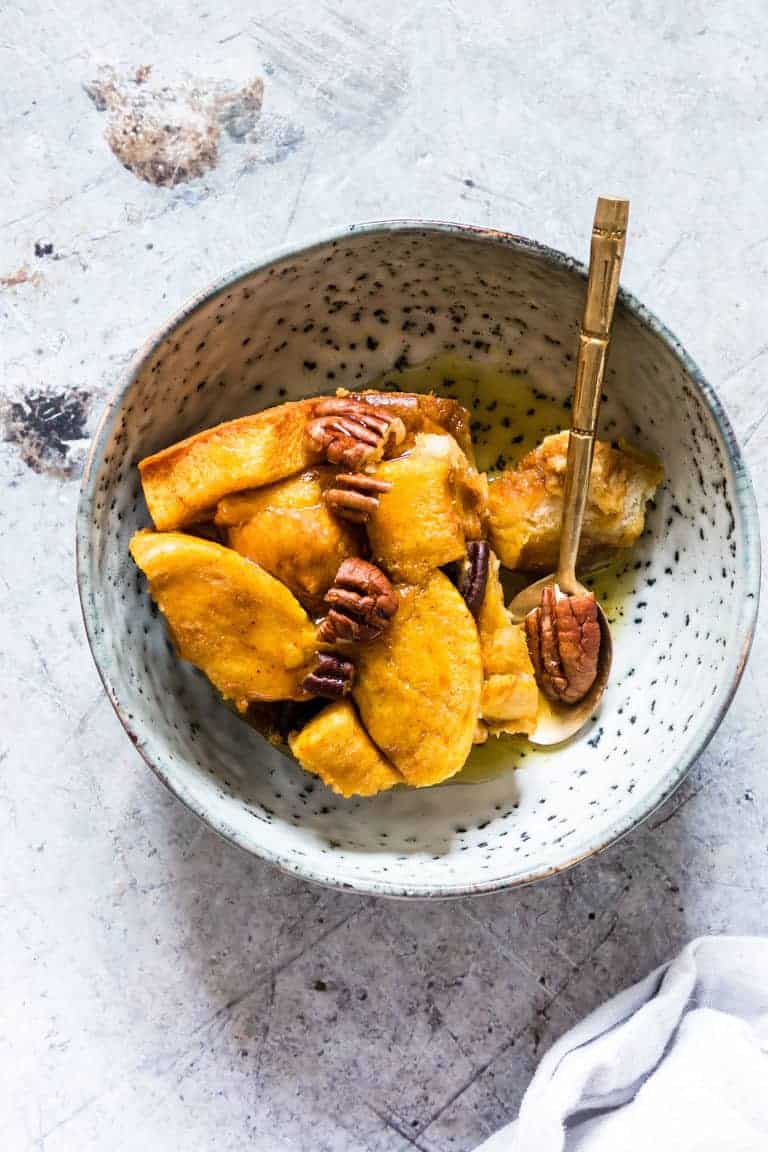 Why This Is The Best Bread Pudding Recipe

Let’s talk why you NEED to make this Slow Cooker Pumpkin Bread Pudding. And I don’t say the word need lightly. It is because it is the best Bread Pudding Recipe EVER.

This post contains affiliate links. For more information, check out my disclosure.

Here are some of the items you will need to make this recipe.

How To Make Slow Cooker Bread Pudding With Pumpkin

Step1. Lightly oil or spray the inside of your crockpot.

Step 2. Add the cubed bread and the pecans.

Step 4. Pour the egg mixture over the bread and mix using a spatula till the bread is well coated.

Step 5. Press the bread mix down to flatten it a bit and then cover the slow-cooker and cook on low for 3-4 hrs or until a skewer inserted in comes out clean. 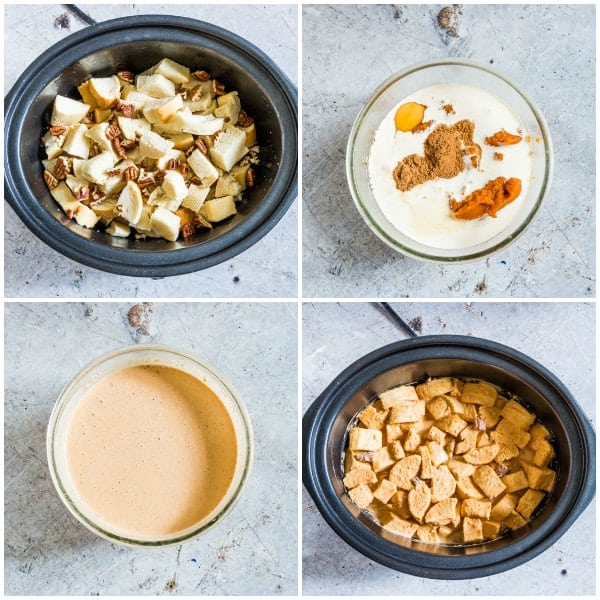 Yeap, that is it.

Fancy making a slow cooker apple bread pudding instead? Well that is super easy to do. Swap the pumpkin puree for some apple puree and a few apple pieces and use cinnamon instead of pumpkin pie spice and you are good to go.

How To Make Bread Pudding In The Oven

If you prefer to make this Pumpkin Bread pudding in the oven then you can. Here is how.

Step 2. Assemble the bread pudding in an oven dish. 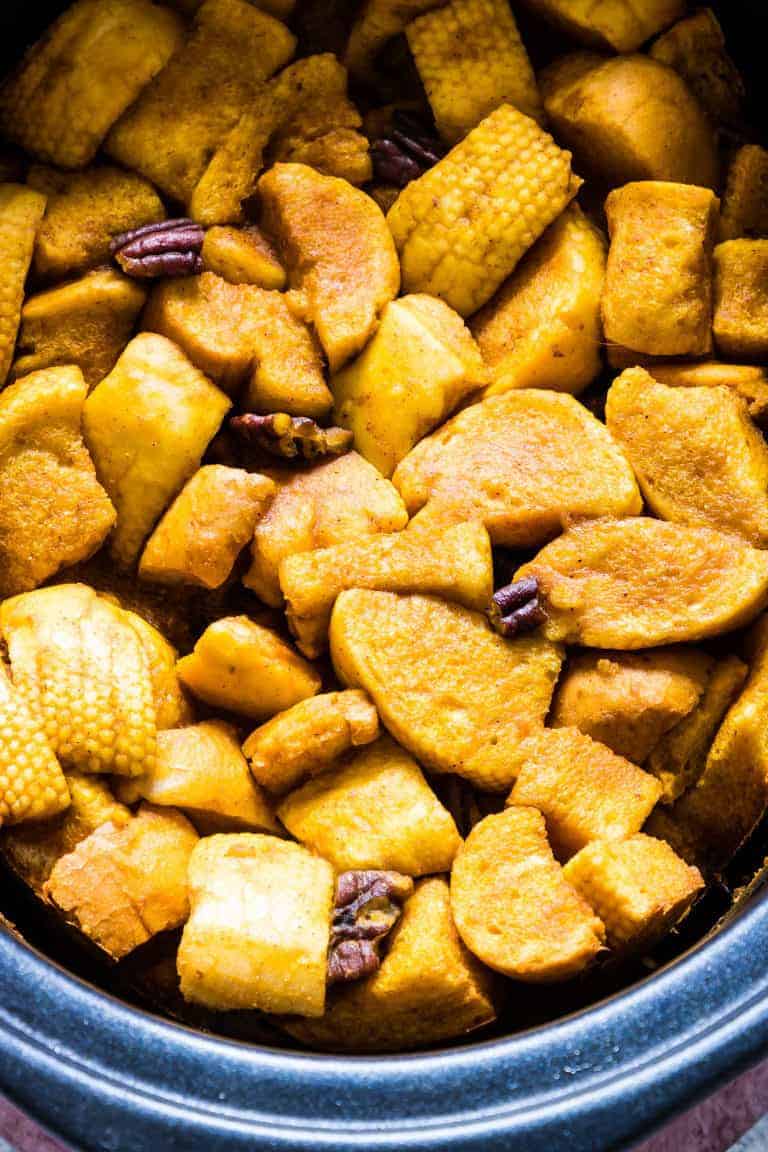 What Kind of Bread Is Best For Bread Pudding?

To make the best bread pudding recipe you will need the right type of bread.

You should use bread that is

The three breads I recommend as a great starting point are a French baguette (which is what this recipe uses), Brioche or a Challah loaf. Try all three and see which one you prefer.

What to Serve with Bread Pudding

That is the beauty of this recipe. You can serve it with all the sweet things you like, but here are a few suggestions to start you off. 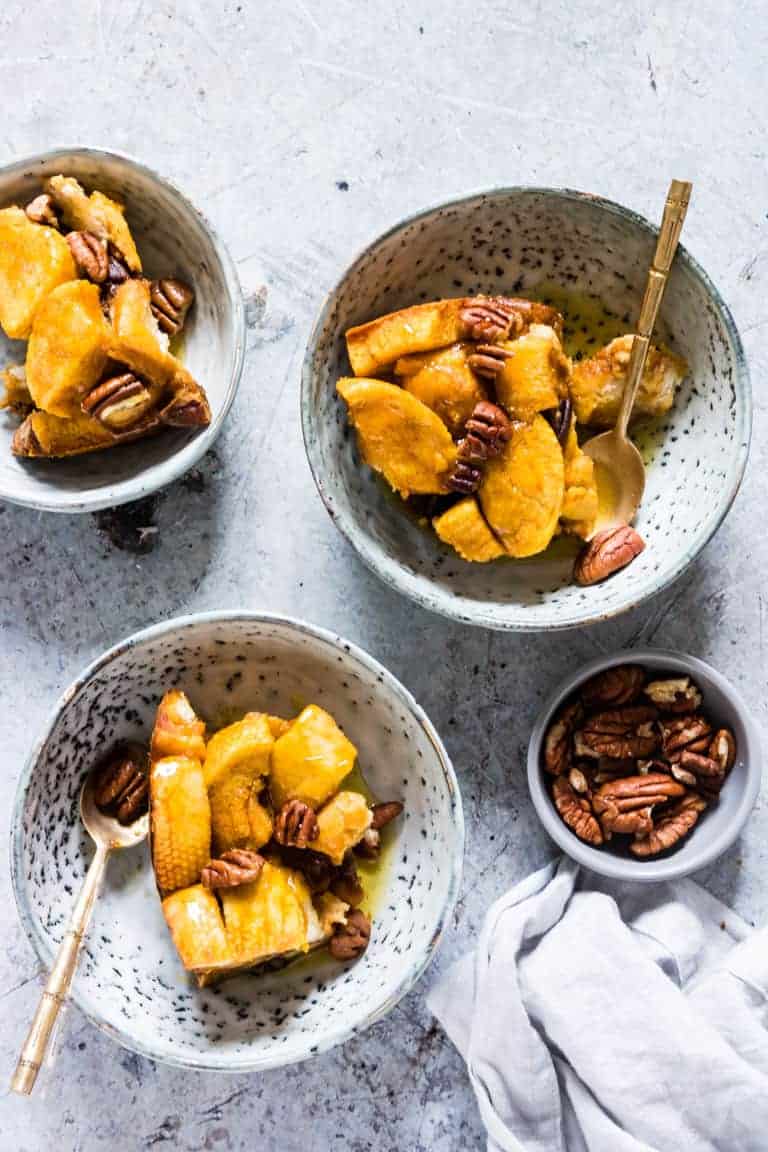 Here are a few more slow cooker desserts to satisfy the sweet tooth in you. 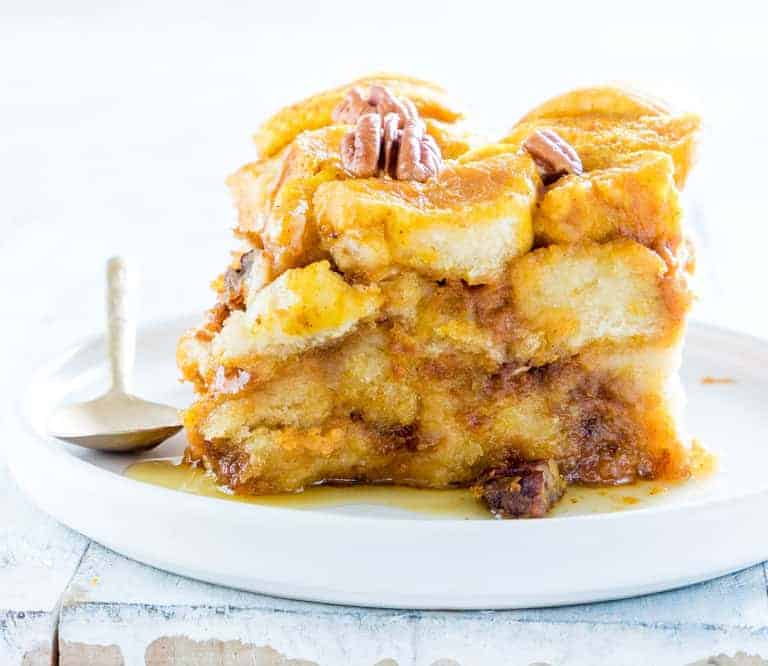 Pumpkin lover I got your back with these easy pumpkin recipes.

Thank you for reading my Slow Cooker Pumpkin Bread Pudding recipe post. And please come visit again as I continue dreaming up recipes, traditional African recipes, African fusion recipes, Sierra Leone recipes, travel plans and much more for you. Thanks for supporting Recipes from a Pantry, UK food blog.

Get The Slow Cooker Bread Pudding With Pumpkin Recipe:

Don't forget to tag #recipesfromapantry on Instagram or Twitter if you try Slow Cooker Pumpkin Bread Pudding! It is really, really awesome for me when you make one of my recipes and I'd love to see it. You can also share it on my Facebook page. Please pin this recipe to Pinterest too! Thank you for reading Recipes from a Pantry. 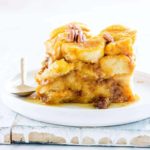